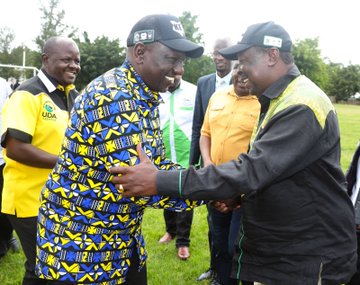 Deputy President William Ruto on Saturday expressed confidence in the IEBC to deliver free and fair elections on a day he was cleared to run for this year’s presidential election.

Ruto who recently sensationally claimed of an ongoing rigging plot where almost one million of his supporters were being struck out of the voters’ register, on Saturday said his Kenya Kwanza team is confident that the Commission is up to the task.

He said his team is committed to adhering to the elections code of conduct to make the August elections above board.

“Kenya Kwanza has confidence in the IEBC, we have confidence that you are up to the task,” he said.

He also appointed Tharaka Nithi Senator Prof. Kithure Kindiki as his chief agent during the August 9 polls alongside Turkana Governor

Raila will appear before the Commission tomorrow.

Ruto arrived at the Bomas of Kenya minutes after 10 am accompanied by his running mate Rigathi Gachagua, UDA chairman Johnston Muthama and party’s Secretary Veronica Maina amongst other party top officials.

He was then ushered to a hall where he held closed-door meetings before being led the Commission’s officials for paperwork.