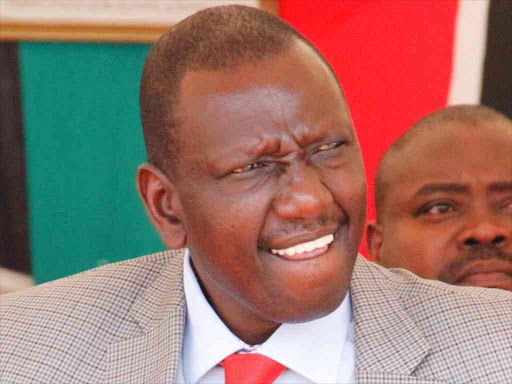 The sibling rivalry within Ford Kenya seems to be a blessing in disguise for Deputy President William Ruto and United Democratic Alliance party.

Politicians allied to the DP from Bungoma county have been using the divisions within Ford Kenya to solidify Ruto’s support base.

Ruto allies in the region include MPs Fred Kapondi of Mt Elgon, Mwambu Mabonga of Bumula, Dan Wanyama of Webuye West, Didmus Barasa of Kimilili and John Waluke of Sirisia.

Barasa told the Star that only Ford Kenya presents a threat to UDA’s popularity in the region.

He said with the divisions in Ford Kenya, UDA has a chance to completely take over the region.

“In the absence of a strong Ford Kenya, the party that has become popular is UDA because all other key politicians are allied to the party,” Barasa said.

He said they are recruiting members to join UDA and sell Ruto’s presidential bid.

Wanyama said Ford Kenya has concentrated on fighting each other rather than popularising their party.

“We have been telling our people that Wetang’ula can’t go for the presidency when they are fighting over party leadership with Wamunyinyi. The only option they have is to join Ruto’s camp,” he said.

Ford Kenya is split down the middle, with Bungoma Senator Moses Wetang’ula leading one faction, while the other wing is led by MPs Wafula Wamunyinyi (Kanduyi) and Eseli Simiyu (Tongaren).

The party split following a coup attempt in which Wamunyinyi declared himself the party leader. However, Wetang’ula moved to court and obtained orders stopping his removal, pending hearing and determination of the matter.

The party’s NEC had accused Wetang’ula of gross misconduct and failing to champion unity in the party.

Other charges levelled against Wetang’ula included failing to reconcile warring members to eliminate friction in the party.

Political observers say the two factions of Ford Kenya may give way to the emergence of other parties in the region.

“Ford Kenya has enjoyed dominance in the region, but I am afraid they might lose it in the coming election courtesy of their protracted sibling rivarly,” political commentator Isaac Wanjekeche said.

Bungoma Governor Wycliffe Wangamati, who supports Wamunyinyi’s side, admitted that the divisions have hurt the popularity of the party.

“It is obvious that a united Ford Kenya is stronger and a divided one gives room for others,” he said.

Wetang’ula said those who attempted to remove him as party leader will be punished at the ballot.

He maintained that Ford Kenya is still the most popular party in the region and the next elections will prove this.