An internal memo detailing a plan by UDA party to counter an expected merger between ODM and Jubilee Party is FAKE.

The memo purports to inform the UDA staff of a counter-strategy to follow the possible merger.

“New guidelines focusing on the obliteration of this alliance will be issued to your respective departments. The social media team is tasked to pour cold water on this merger by using the established pointers as per our earlier meetings. Required funding will be availed,” the internal memo reads.

It was allegedly penned by the party secretary general, Veronica Maina. 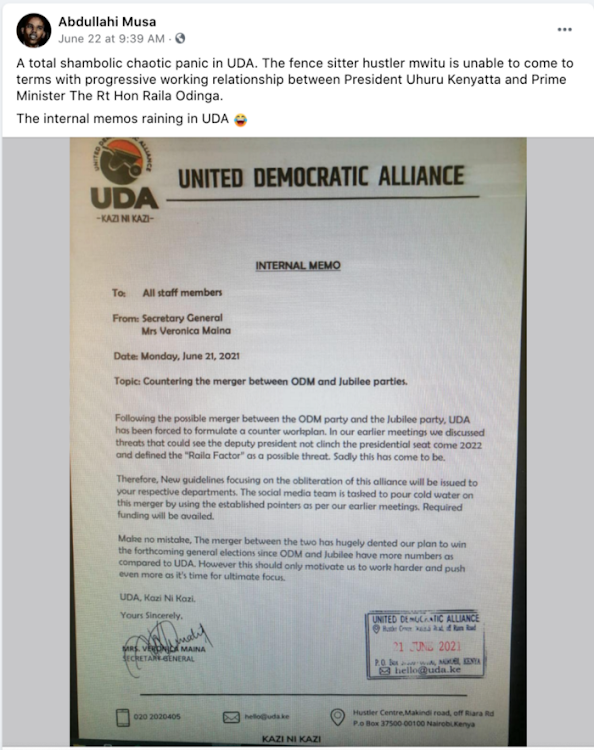 The memo further urges the UDA staff to remain focused as the impending merger is a great threat to the party’s 2022 presidential candidate, Deputy President William Ruto.

“Make no mistake. The merger between the two has hugely dented our plan to win the forthcoming general elections since ODM and Jubilee have more numbers as compared to UDA. However, this should only motivate us to work harder and push even more as it’s time for ultimate focus,” the memo adds.

However, UDA chairman, Johnson Muthama, has flagged the memo as fake. Without divulging much, the former Machakos senator wrote on his Twitter account, “NOTICE! #fake.” He then shared the internal memo with a fake stamp across it. 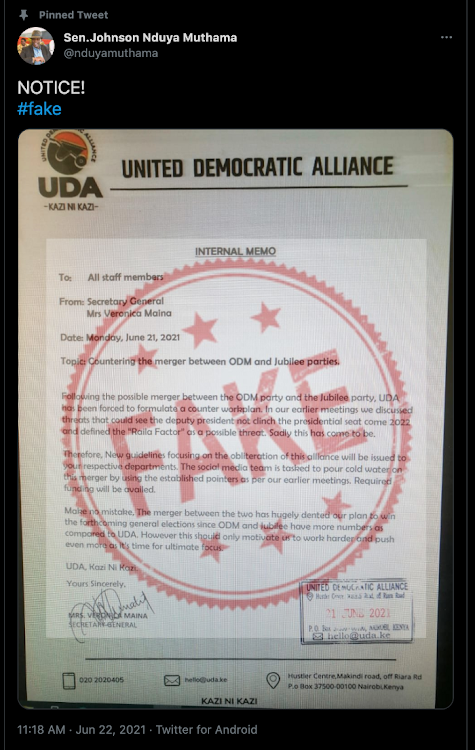 The fake memo emerged days after ODM and Jubilee officials met on June 17, 2021, to begin talks on a 2022 pre-coalition agreement.

“The meeting we have had today is a culmination of several other meetings that we have held before to formalise the coalition with the former Prime Minister,” Tuju told The Star.

PesaCheck has looked into an internal memo claiming to address the United Democratic Alliance (UDA) party staff on how to counter the Orange Democratic Movement (ODM) and Jubilee parties expected merger and finds it to be FAKE.