A new opinion poll by Radio Africa Limited shows deputy President William Ruto leads the 2022 race with a gap of 29 per cent ahead of his closes opponent, ODM leader Raila Odinga.

The poll conducted between July 22 and 30 shows 43 per cent of those surveyed would vote for Ruto to be president if elections were held during that period.

This is, however, short of the 50 per cent plus one vote required to win the presidential contest in the first round.

However, 15 per cent of the 3,127 adults polled across the 47 counties said they are still undecided on who they would vote for.

North Eastern leads in the number of undecided voters at 24 per cent followed by Nairobi (21 per cent), Upper Eastern (20 per cent) and Central (20).

The regions with the lowest number of undecided voters are Nyanza (five per cent), Lower Eastern (six per cent) and South Rift (nine per cent).

The undecided could be waiting for the formation of the final coalitions and the selection of running mates.

Six per cent of the respondents in the poll funded by Radio Africa Limited, however, said they would not be voting if elections were called today. 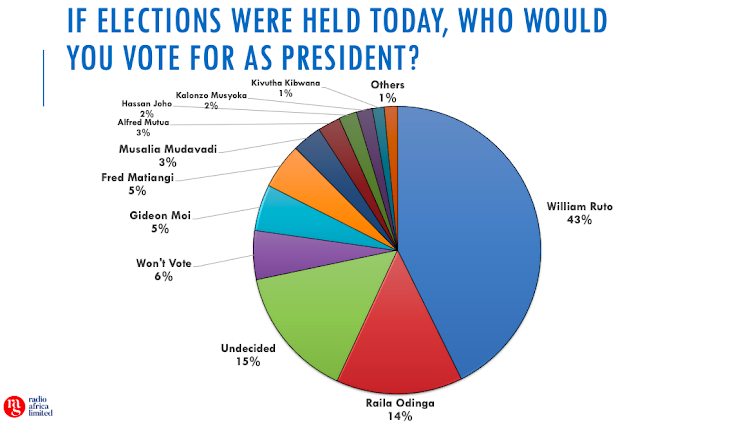 Those who would vote for Raila were 15 per cent, with the third-most preferred candidates being Kanu chairman Gideon Moi and Interior Cabinet Secretary Fred Matiang’i at five per cent.

Additionally, when asked who they think will be president regardless of their choice of candidate, 49 per cent said Ruto, with 16 per cent saying Raila and five per cent each for Moi and Matiang’i.

The poll reflects sentiments shared by President Uhuru Kenyatta in meetings with Raila and other former Nasa principals.

The President is reported to have told ANC leader Musalia Mudavadi, Wiper Leader Kalonzo Musyoka, Ford Kenya leader Moses Wetang’ula and Moi that they should unite and support Raila.

He is said to have shown them polls indicating the only way to beat his deputy — with whom he has fallen out — is to unite and support Raila.

Kalonzo takes the fifth position with two per cent alongside Mombasa Governor Hassan Joho. The sixth position goes to Makueni Governor Kivutha Kibwana, with one per cent support.

Other candidates would get the remaining one per cent of the votes.

Random, Multi-stage stratified using PPS (proportionate to population size) Spread across all the 47 counties in Kenya. Sample split was guided by all adults age 18+  proportionate to size as per the KNBS Census, Sept. 2019.

Kenyan adults, aged 18 and above living in all the 47 counties of Kenya

The Survey was funded by Radio Africa Limited.

On demographics, 44 per cent of the men polled would vote for Ruto while 42 per cent of women would with his highest support coming from those aged between 18 and 24 and 30 to 39 years.

Ruto’s highest support appears to be in South Rift at 59 per cent and North Rift at 56 per cent, followed by Uhuru’s Central Kenya backyard at 49 per cent.

The larger Mt Kenya region is seen as a centrepiece in the 2022 elections as it holds a huge vote bloc but has no presidential candidate.

The region is currently fragmented, with Uhuru seeking to have the opposition united and sell it as a package in the region.

A portion of Uhuru’s supporters is drumming up support for Raila while another section is in Ruto’s camp.

Uhuru’s Jubilee Party has been losing ground and has lost in recent by-elections to the Ruto camp in Juja and Kiambaa, which are in his home county of Kiambu.

Moi’s largest support base is in the North Rift and the South Rift at nine per cent followed by Lower Eastern at eight per cent.

Matiang’i scores highest in Lower Eastern and South Rift at 11 per cent and comes second to Ruto in Central at 10 per cent. 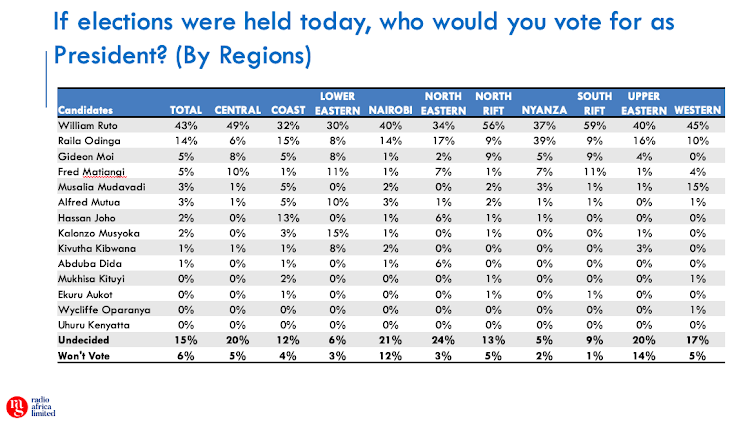 A comparison with previous Radio Africa Limited polls done in October 2020 and January 2021 shows this is the highest level of support yet for Ruto.

On the other hand, Raila’s fortunes appear to be dwindling with each poll, having polled 28 per cent in October, 20 per cent in January and 14 per cent in the recent poll.

Interestingly, Moi and Matiang’i have had the largest jumps in the three polls.

Moi was at two per cent in both the October and January polls and is now at five per cent, while Matiang’i had one per cent in the previous poll and now ties with Gideon.

Kalonzo’s rating has increased from one per cent in October and January to two per cent. 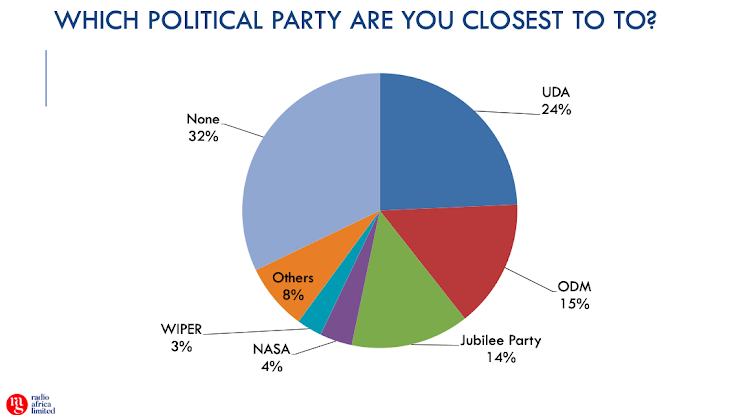 The number of those who believe Ruto will be the next president regardless of their choice of candidate has remained constant at 49 per cent in the three polls conducted by Radio Africa.

Those in North Rift are the most convinced Ruto will be President at 63 per cent, followed by South Rift at 59 per cent and Central Kenya at 54 per cent.

For Raila, the highest number of those who think he will be the next president is in Nyanza at 30 per cent, which is curiously lower than Ruto’s 42 per cent in the region.

Those who say they can’t tell who will win the presidency dropped from 20 per cent in January to 15 per cent in the July poll.

Mudavadi’s Western Kenya base leads in the belief he will be president at eight per cent but he scores less than five per cent in the rest of the regions.

The poll also shows 32 per cent of Kenyans do not associate with any political party currently, with another 24 per cent saying they feel closest to Ruto’s UDA.

ODM has support of 15 per cent, while the ruling Jubilee Party has 14 per cent.

The defunct Nasa coalition has a support of four per cent while Kalonzo’s Wiper has three per cent, with the rest of the political parties attracting eight per cent support.