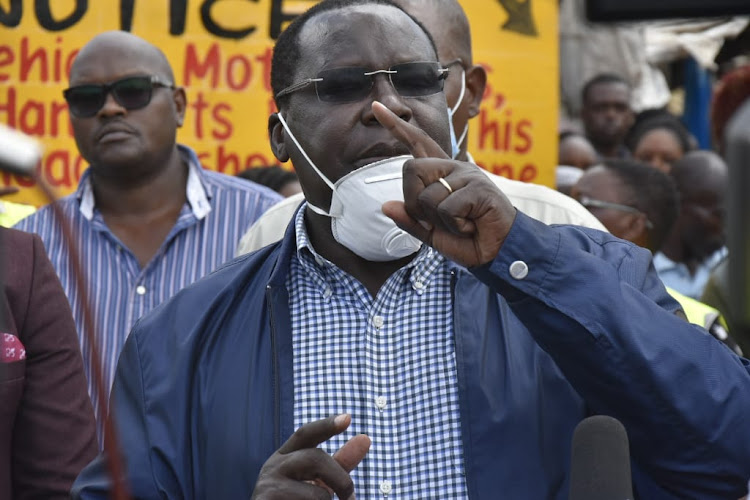 A resounding defeat is what awaits United Democratic Alliance in the Kiambaa parliamentary by-election, Kiambu Governor James Nyoro has said.

Nyoro said Jubilee is still the popular party in the region and that its candidate Kariri Njama will beat UDA’s John Njuguna hands down in the polls schedulked for Thursday next week.

Nyoro who spoke at a burial ceremony in Gatukuyu village in Gatundu North said the political tantrums being staged by UDA and the propaganda being peddled aimed at portraying Jubilee as a weak will not derail the party’s pursuit to clinch the seat.

He claimed UDA members are out to popularise the party in the region ahead of the 2022 General Election while Jubilee is seeking to retain the seat.

The seat was left vacant following the death of MP Paul Koinange in March.

“We will not cow to the propaganda and empty rhetoric by some politicians affiliated to the UDA. We know they are not seeking the seat to help Kiambaa residents but to seek popularity and test waters in the region’s politics,” Nyoro said.

The governor said UDA’s desperation to show might in the race has seen them create false opinion polls that portray their candidate as the favourite for the July 15 by-election.

“They are desperate and are using all manners of political gimmicks to confuse Kiambaa residents. We know the plan behind the opinion polls they are conducting and sponsoring is to protest the imminent defeat,” he said.

“Jubilee is doing everything possible to retain the seat and our candidate will emerge the winner,” Nyoro added.

The governor noted that Jubilee is keen to take over the Sh10 billion worth of development projects that has been allocated to the constituency by both the National and county governments.

“We have road, water, health, and education projects that we want as a party to complete for the remaining part of the term. The projects that have been initiated by the Jubilee government are important to Kiambaa residents and I am sure that the people of Kiambaa will vote for development instead of empty rhetoric and false promises,” he said.

Nyoro who is part of the Jubilee party campaign team in the Kiambaa and Muguga ward by-elections exuded confidence that the ruling party will win both seats.

Just a week to the by-elections, Jubilee continues to consider the two polls a must-win after the humiliating loss of the Juja seat in May while UDA maintains that their win will make Deputy President Wiiliam Ruto the front-runner for the August 2022 presidential election.

The Kiambaa seat has also attracted other contestants among them Richard Njoroge who is vying on The New Democrats ticket, Evans Gichia (Independent), Karomo Muchugi (Federal Party), Mugo Munyinyi (Independent) and Willy Mbugua who is also an independent candidate.